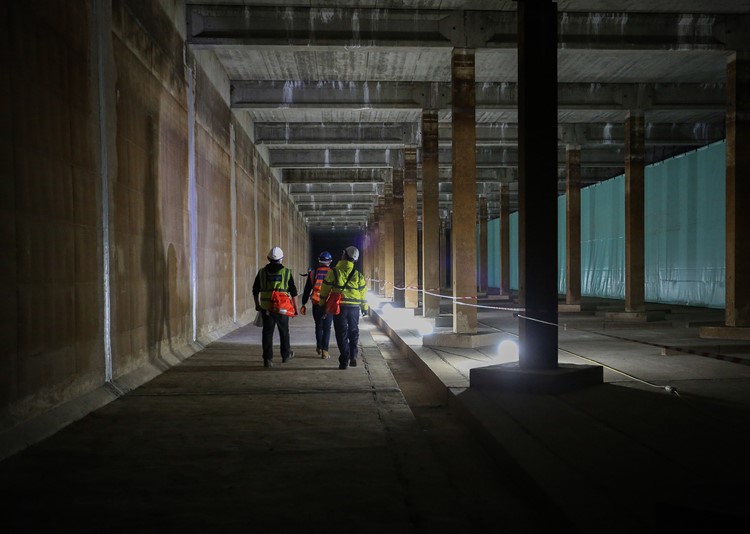 Water for the 41-year-old reservoir is pumped in from Huntington water treatment works in Chester. The main driver for the project was water quality, which risked being compromised by heavy ingress from rainwater.

The reservoir comprises two equal-sized compartments. The works was undertaken in two phases. Work on compartment one ran from April to September 2018 and on the second compartment from December 2018 to May 2019.

External works to seal the roof were delivered first, to prevent rainwater from entering the roof structure. The ingress was caused by the deterioration of the joint sealant between the concrete panels, a common problem in tanks of this age.

Outside of the work scope, one of the main challenges to the first compartment was the extremely warm weather experienced in the UK during the summer of 2018. United Utilities’ requirements for drinking water projects state that diesel-powered excavation equipment is not permitted onto the roofs of reservoirs, so all work is carried out manually.

The site agent managing the delivery team took the decision that more rest breaks were required than usual. This substantially reduced the risk of fatigue and the possibility of a health and safety incident, allowing the operatives to manage the heavy work in high temperatures. A water cooler and a gazebo were also brought in to provide additional refreshment and shade on the roof.

Externally, securing the roof from ingress was the priority, so the concrete roof panels were prepared first, using grinders, before being thoroughly cleaned. MasterSeal 933 was applied with brushes before the 300mm-width overbanding was rolled out along the 27 roof joints in each tank.

All materials used internally were required to conform to the DWI Regulation 31 list of approved products for use in public water supply. A major requirement is control of the environment within the reservoir to meet the criteria detailed within the manufacturers’ instructions for use (IFU) documentation. Adherence to the IFU, and providing appropriate evidence, is critical for both the application and curing of sealing products.

The inspection undertaken jointly by United Utilities and Stonbury identified that the existing bitumen joint sealant was past its service life. Therefore, MasterSeal 933 adhesive and MasterSeal 930 overbanding, were applied. The IFU stated that a minimum temperature of 7oC was required at all times within the reservoir during the application works.

Initial discussions and budget costs identified that the size of the reservoir compartments would require installation of a large temporary power source to provide adequate heating and lighting during the works. Given the size of the diesel-powered generators required, a potential noise pollution hazard was identified as the site is in a residential area.

As the plant would need to run 24/7, there was also an increased risk of attracting trespassers onto site. This meant security would be required overnight and at weekends, further adding to the cost of the scheme.

Following detailed conversations the decision was made to install a permanent electricity supply into the valve house building. This eradicated the noise pollution issue and negated the requirement for security.

United Utilities paid for the cabling required for the heating and lighting to be retained on site as an efficiency for future maintenance works within the reservoir. The decision gave the utility a permanent onsite power source and saved over £50,000 in project costs.

Initially, mechanical preparation of the concrete substrate was undertaken. This provided a key for the BASF Masterseal 933 overbandage adhesive. Samples of adhesive were applied to the prepared areas. This allowed pull-off tests to be carried out to prove the adequacy of the preparation as part of Stonbury’s quality assurance (QA) procedures.

Some 40 rolls (800 linear meters) of BASF MasterSeal 930 overbandage were used in each of the two compartments, fixed to the adhesive-coated walls. Lengths were run down each wall joint and two meters onto the floor to ensure the tanks were completely watertight.

Stonbury maintained detailed application and cure records at all times and datalogging equipment constantly recorded the exact temperature within the tank. The information was downloaded and passed to UU as a record of compliance with the manufacturer’s IFU along with all other QA records.

A baffle wall running down the centre of each compartment also required replacement to bring materials into line with DWI approvals. The baffles ensure the water circulates throughout the tank so no dead areas occur, which is likely in this instance due to the inlet and outlet both being situated on the same side of the tank. Operatives from Waterlines Solutions installed the company’s DWI-approved Flagon thermoplastic membrane liner.

Flood tests were carried out internally and externally post-repair. Fire hoses transported water from onsite hydrants onto the roofs and visual inspection to identify any further ingress was carried out from within the tanks. Whilst the initial scope for the external works was successful, water ingress subsequently occurred through previously dry areas.

These were remediated by applying the same techniques until the tank was passed as defect-free. The project time extended from 10 to 26 weeks as a result of extra ingress points on the roof being identified and additional sealing work taking place.

A further 24-hour flood test involved bringing water into the tank for 24 hours via sprinklers before carrying out sampling to identify potential contamination caused by ingress.

Onsite health and safety risk management included mitigating against potential trips, slips and falls due to open excavation. Procedures for working in confined spaces, at height and using scaffolding were also followed. Regular site audits were undertaken by Stonbury’s quality, safety & environment department and no health and safety incidents occurred during this project.

The client was kept informed about the works throughout the project using the Stonbury Client Portal. Once the job set-up was activated all the stakeholders were notified by email and invited to log into the portal for project updates. These postings were made at least twice a week and regular site meetings were also arranged.