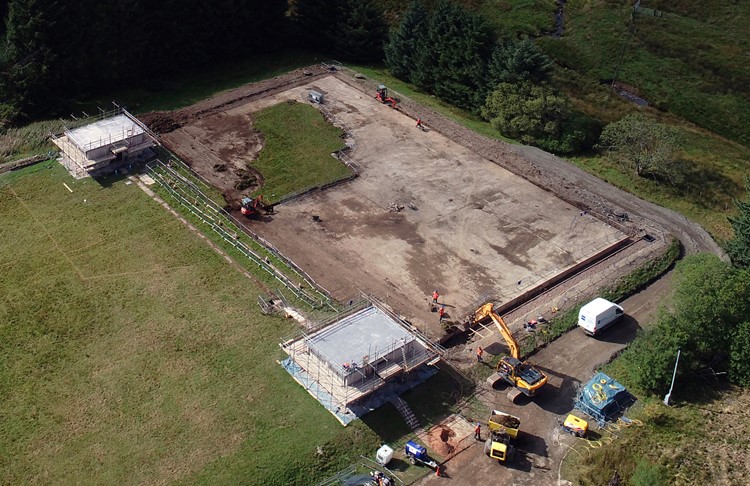 The scheme, located in southwest Scotland, included the installation of new external roof membrane, overburden removal and reinstatement and outbuilding refurbishment in a programme of 40 weeks.

As a strategically important water treatment works in Scotland, Stonbury and ESD were pleased to deliver this major refurbishment which will protect the integrity of the assets for years to come.

The scope of the programme was to re-waterproof the reservoir roof and internal joints to re-create a fully watertight structure. The team was also engaged to install a new ducting route to allow for the existing site cabling to be renewed and re-routed. In addition, refurbishments to the valve houses included the application of a liquid roof membrane and a new roughcast system to the walls.

To re-waterproof the reservoir, the team removed the existing soil overburden and excavated the tank perimeter to access the roof wall head joint. New perimeter drainage was installed. The roof slab was prepared with high pressure water jetting and the application of a cementitious screed. Overbanding was applied to the wall head joint and all external roof joints and a new membrane was then applied.

When works to the tank roof were complete, a new 20mm washed and rounded gravel overburden was reinstated and perimeter kerbing added. Internally, works included leak sealing and overbanding of all joints showing signs of ingress and concrete repairs to walls, columns, and beams.

The location of the reservoir, which is situated 400 metres above sea level, posed unique challenges in weather and temperature variation. The team reported four seasons experienced in one day. A specialist product, Natcem AC, was used when applying the screed to the roof to ensure productivity could continue in temperatures as low as 1°C.

Working hours were adjusted to include 5:00am starting times when applying the roof membrane to ensure products were applied prior to the rise in temperature throughout the day and ensure maximum productivity could be achieved.

Updates were provided regularly on Stonbury’s online Client Portal, where the project received highly positive feedback from the client’s team throughout the programme; praising the site team for their efforts to keep the project to schedule in a safe and professional manner during challenging conditions.