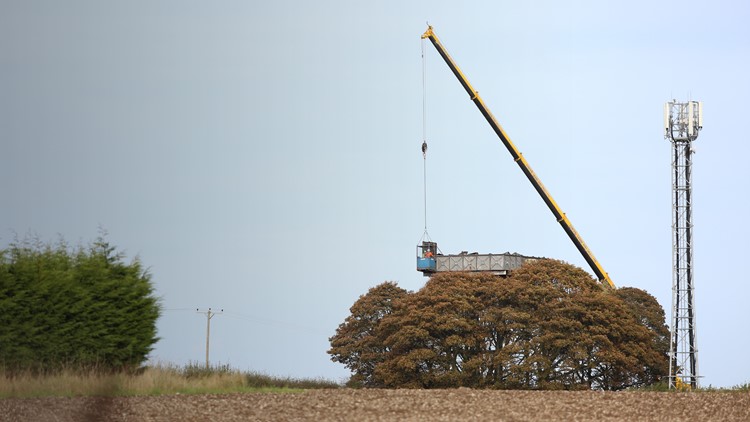 Following further inspection, it was decided that the safest and most cost-effect solution would be to demolish the tower, having been taken out of service over 15 years ago.

Working with Stantec, - the clients strategic planning partner, acting as principal designer - the initial planning stages of the project were completed. This included liaison with the local council regarding demolition notices, planning applications and highways, and with local stakeholders, including landowners and a telecoms company who had a mast located next to the tower. Ecology surveys were also required to check for bats and nesting birds in the surrounding trees.

Initial works included the installation of a crane pad, designed to hold the 60T crane which would be utilised both as a man safe cage and to lift the panels from the tower once cut into sections. Once installed, tested and signed off the crane was moved into position ready for the demolition sub-contractors to begin.

The team began by cutting the roof into 1m x 1m sections which were then lowered into the footprint of the tower, allowing access to the remaining structure. The walls and remaining support legs were then dismantled in stages, and sections were lifted safely down into a skip and removed from site for recycling. Due to the fragile nature of the tower, all works were completed in a man safe cage, ensuring no pressure was placed on the structure.

The tower was located near a small village and had become somewhat of an unofficial landmark to the locals who had fond memories of the water tower during their childhood. This sentiment was shared by many and resulted in concerns being raised when the initial demolition notices were released, so it was decided that Stonbury Community Portal, a communications platform, would be used to respond to queries, comments and complaints.

The online platform was updated each week, with an explanation of the work and the time scale, giving the local community the opportunity to voice their concerns whilst being kept in the loop at all times. One resident even asked to buy a panel from the tower for posterity purposes. This was a fantastic opportunity to engage with the public during the works.

From start to finish, the full demolition took three and a half weeks to complete, which was two weeks ahead of programme.